Did you plan from the beginning to work with these well-known musicians together for STRANGER? Why did you choose them?

For example, Iggy Pop was one of my list of rock icon idols along with David Bowie and Rolling Stones.I’ve dreamt for a moment to make music together.
When I first met him, it was actually at Berlin Airport. He was on the same flight as me, from Tokyo. When I saw him in person, I was hesitant to go ask him for his autograph. But instead he walked up to me, and asked me ‘are you the famous guitarist from Japan?’ And I said ‘yes’. Then he said ‘can you give me your autograph for my wife?’ Can you believe it?? That Iggy Pop asked for my autograph before I asked for his!?? So I brought up this story to him when we were in the studio for recording, he remembered and said ‘wow, that was you!’. Almost like a meeting of destiny.
And with Richard, we were connected through our label, then had a skype meeting, shared files via internet—that’s how ‘Move It’ was born. Richard is an amazing and respectful guy.
Not every collaboration goes smooth as I’ve experienced for this album. Each moment was so memorable and there’s a sense of ‘destiny’ connection. It was so exciting. 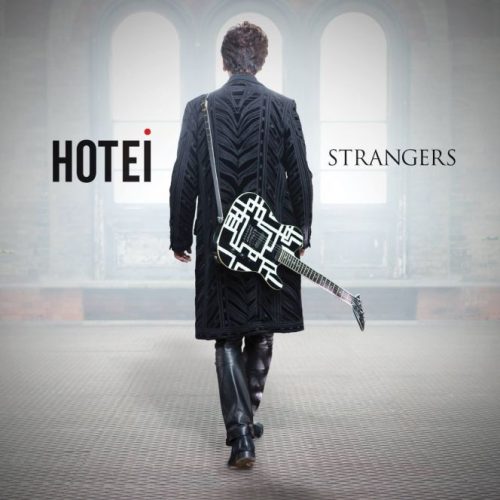 This song’s lyric is Iggy’s view of the world. It is very cynical but full of humour.
The main character of this song is Iggy himself, but it can be you.

For the tour you decided to present your music with a 3 men band. I think this will create a new view to STRANGERS and you get closer to the listeners. What’s the real reason for the decision?

With my first ‘petit’ Euro Tour, I didn’t want to start from big venue with huge production. Because I want to touch directly with audience, and say ‘hello’ to individuals.
By taking minimal band, three pieces, I feel I can expose my guitar play more, and that way I can feel audience’s reaction with my skin.
This trio has very modern approach with infinite possibility. Cliff on drums will skilfully use hybrid of electric drums and acoustic drums. Noko on bass, he will create danceable beat. I’m so proud to present myself with this trio.

It’s not easy to bring the musicians; you worked with for STANGERS; on stage together. But if you could bring one of them with you on tour, who would it be?

I will go bankrupt if I was to bring everybody on stage! (smile)
However, I will love to have an opportunity to invite Iggy on stage with me some day.
With Richard, I need to submit an application for a permission with fire department. Just like how Rammstein does each time. Though I’d be nervous around fire… (smile)

In the interview with EN.CORE you said as an answer to the question – How extensive is your British life’s impact on your music? – “I think I stopped making music with my head, but more with my soul”.
Do you think that in the Japanese music business it’s more important to make music with the head than the soul?

I realised all music is dance music since I start living in UK. I realise I’ve been more conscious about the perception audience—how they will look at my music. You need to put effort to survive in any part of world, but Japanese market is quite unique in that way since it is unified market; thus, harder the competition. Perhaps that might be me over thinking.
Of course, any music that touches to people should come from your heart, I still believe in that.

You made the soundtracks to Kill Bill “Battle Without Honor Or Humanity” and among other things to Lupin The Third “Trick Attack”. What inspires you to create soundtracks like these? It’s different to create a “normal” song?

I used to love listening to soundtrack since I was young. I lose myself to soundtrack in my own story. When I read novels, I had a habit of thinking what sort of music will fit to this scene. Perhaps that is the reason why people describe my music is often cinematic.
I’ve been a fan of spy movie. I had to admit, those songs I’ve written for movies include lots of brass sound which may be the great influence of gorgeous movies, such as James Bond’s.

And you compose to Samurai Fiction the complete music. How did you plan this music? How evolve this music?

I’ve worked out by applying BPM according to each finished scene, diligently calculated to make most impact. That movie is like ‘musical of samurai’ , delicately synchronised with visual and audio. It was a lot of work, but I learned a lot.

‘cause I am asking you about the Samurai Fiction. In Japan people call you the Samurai of Guitar. How did it you get this name?

Perhaps my guitar sound is very sharp?? You might want to be careful getting close to me. (smile)

Thank you for taking your time to answer my questions.

Thank you for giving me a great opportunity. Looking forward to see you at the gig next week!!