The Japanese Vampires are back with a new album and American Tour.

You will recognize the influence of western music in UNDERWORLD. It’s not the typical Japanese sound, more some American new metal sound from the 2000’s. Maybe It’s the great influence from the producers Howard Benson and Kane Churko.

The album released at the 28. April by Eleven Seven Music this year. 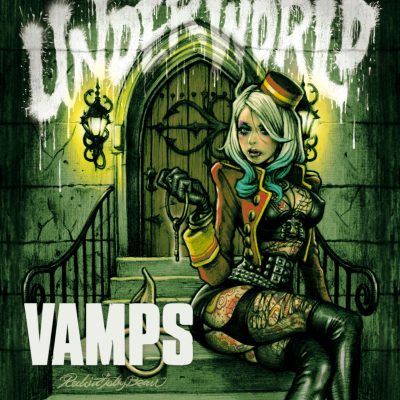 The album begins with the correspondent title UNDERWORLD. It’s the introduction to the album and Vamps world. Like Hyde is singing he will take you to his UNDERWORLD.

Either in the following songs it’s a heavier and faster sound compare to their former album. KAZ and the other members created a new shade of Vamps melodies with perfekt dominating drums and heavy guitar sound.

In DON’T HOLD BACK you can hear a keyboard/synthesizer wich provide the dark dramatic sound for this song. Some parts remembers of the Linkin Park sound.
RISE OR DIE is the rocking anthem wich will be a great song for a live gig. Everyone will sing along with Vamps.

At this album there are some great cooperations with Apocalyptica, Kamikaze Boy (Man With A Mission), Chris Motionless (Motionless In White) and Richard Z. Kruspe (Rammstein/Emigrate)!

Tacklist:
1. UNDERWORLD
2. CALLING
3. BREAK FREE feat. KAMIKAZE BOY of MAN WITH A MISSION
4. DON’T HOLD BACK
5. BLEED FOR ME
6. IN THIS HELL
7. INSIDE OF ME feat. Chris Motionless of Motionless In White
8. RISE OR DIE feat. Richard Z. Kruspe of Emigrate / Rammstein
9. SIN IN JUSTICE feat. APOCALYPTICA
10. B.Y.O.B (BRING YOUR OWN BLOOD)
11. RISE UP